It wasn't the greatest week that Habs fans have ever seen. It kind of flat-out sucked. But there's still tons to be optimistic about, right? Stuff that isn't about the Habs? 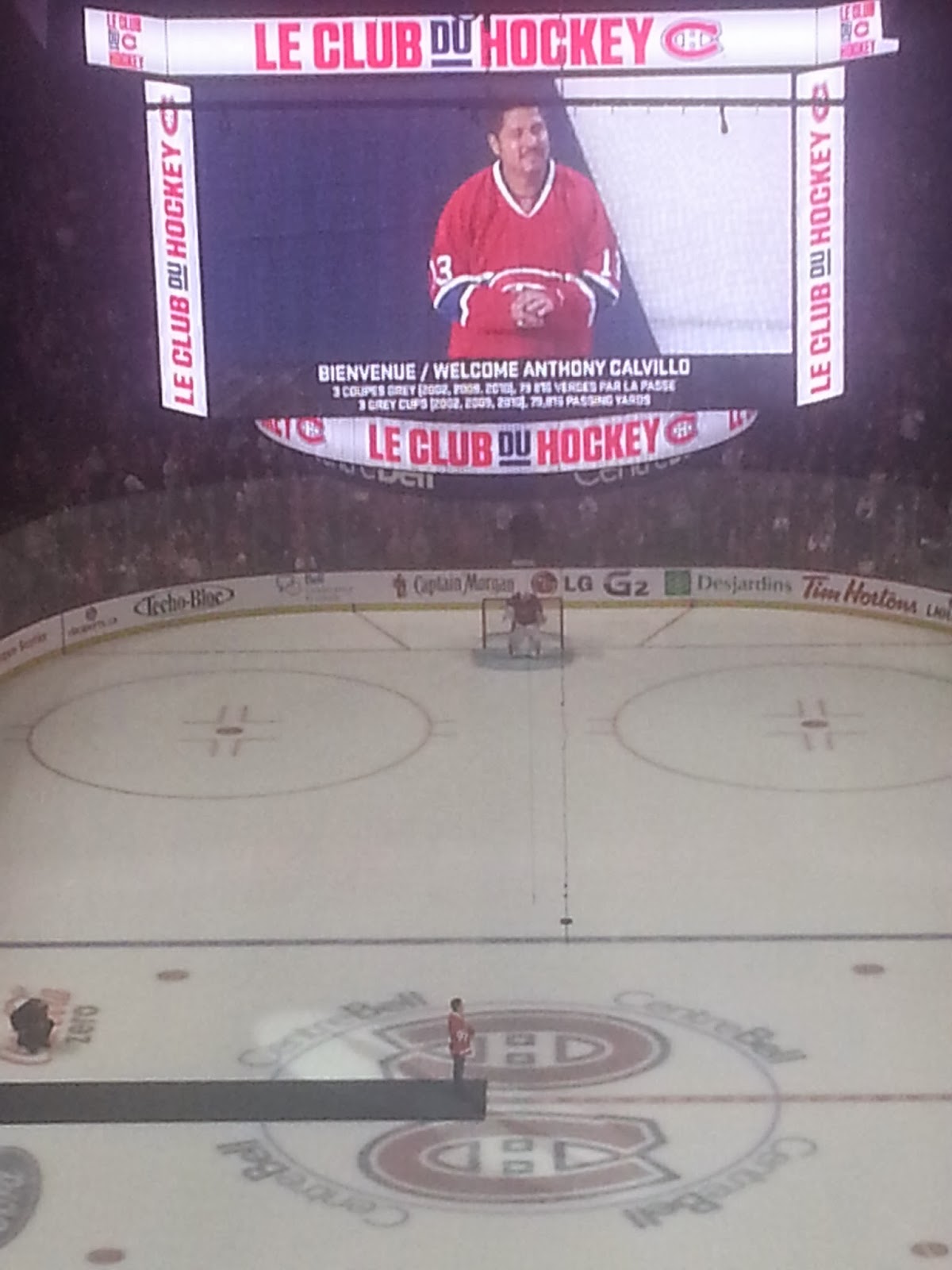 + The biggest Plus of the week, of course, goes to Anthony Calvillo. His career speaks for itself, but his behaviour both on and off the field is what will make him a legend.


+ I know that any display of emotion can cause a player to get in trouble, especially when that player's name is P.K. Subban, but I have no problem with his angry stick-throwing during the Capitals game. He was angry. We're all angry. No use hiding it.
+ Peter Budaj gets as many Pluses as he wants for picking a fight with Marc-André Fleury. Because who wouldn't want to mess with Fleury?
+ Kendrick Lamar and Imagine Dragons' performance at the Grammys was one of my favourites in recent years. I know that the Grammys thrive on putting artists together onstage just for the novelty of it, but this combination worked so well. I could watch it over and over.
+ This picture of Kobe Bryant, 50 Cent, and Meryl Streep:
+ I'm a sucker for really sweet human interest stories. (Because I'm a huge sap who cries at everything.) Seahawks player Derrick Coleman's exchange with a 9-year-old deaf girl who called him her inspiration is just about the best thing I could read in preparation for the Super Bowl.

is just further proof that he is, in fact, an idiot. Assuming that a woman is a prostitute is just about the most offensive thing that anyone could do, and the fact that it's coming from a rich man who probably doesn't judge women based solely on the books they read. (Providing, of course, that he knows what a book is.)
- Oh, and also the fact that the Montreal Canadiens just can't get themselves together, and that their coach is just barely treading water.
- Oh, and the fans who misbehaved during Saturday night's game against the Capitals also get a Minus. Enough with the ironic cheers and the booing your own team. You guys are even worse than the jerks who leave early. (Inside this Minus, though, is a Plus, to whoever it was sitting near the Family section that started a "Never quit!" cheer.)

Plus/Minus will be deemed "excessive and unnecessary" by the Sens

First, Marcel Aubut filibustered the Team Canada roster announcement. Then Jacqueline Bisset made an incomprehensible acceptance speech at the Golden Globes. I am forever grateful that Don Cherry's hero's welcome at whatever Hockeyville was this year lasted under an hour.

PLUS
+ This picture of the Sedin twins holding the Hansen twins (Via K. Leroux): 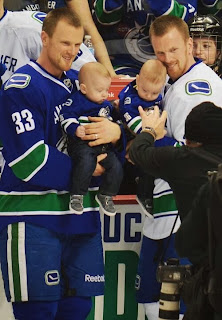 + Get benched, watch the city explode with rage, come roaring back with an awesome performance against the defending Cup champions, then run the world Beyoncé-style. It’s the P.K. Subban way of life.
+ Tomas Plekanec. We love you and your goals and your turtleneck.
+ A huge, mustachioed Plus goes to George Parros for planning a fundraiser for children with cancer and inviting people to cut off their hair and donate it. I cut my long hair short a few years ago for the same purpose (by the same stylist who gave haircuts today!) so I know what it feels like to say goodbye to a few inches of hair. Four haircuts and $1545 is a pretty nice take for an event that was announced less than a week ago. Here's hoping it becomes an annual event.
+ Is everyone in the NHL scoring hat tricks? What colour of Gatorade are they drinking, and can I go buy some right now?
+ Everyone knows that I could go on at length about Carey. But just for a minute, let's about Corey and this incredible save:

+ So great to see Chris Hadfield singing the national anthem at a Habs-Leafs game on Hockey Day in Canada, almost exactly a year after posting this from space:

Montreal, you're shining bright, it must be @hockeynight in Canada! pic.twitter.com/2Sv8x8yq
— Chris Hadfield (@Cmdr_Hadfield) January 19, 2013

- Someone needs to explain to Ottawa that hockey is a game, not an excuse to blow literally everything out of proportion. I can't believe that there are fanbases out there with bigger drama queens than Montreal.
- I never thought I would give a Minus to anyone from Friday Night Lights, but Scott Porter went to an LA Kings game last week, and Instagrammed a picture of the Magic Johnson statue outside of Staples Center. Come on, man, you were so close to the statue of Gretzky!
- To anyone that’s still fat-shaming Lena Dunham: Here’s a Minus. You can pretend it’s the medal you think you deserve for being sooo cutting-edge and original. (Let's just extend this Minus to anyone who sees an actress and says she "needs a sandwich." Everyone needs sandwiches because sandwiches are delicious.)

So, as usual, what did we learn this week? Keep calm and grow a mustache.
Posted by Rookie at 8:05 PM No comments:

Plus/Minus puts the cold and sinus meds away

First of all, I'd like to give a Minus to the cold I had, followed by chronic headaches that made it impossible to publish this Plus/Minus on time (and publish a year-end post at all.) But life, like this Plus/Minus, is full of surprises.

+ To our Olympians, even though P.K. took that penalty against the Sens right before overtime on Saturday and I was really mad at him for about an hour. But he was also quite spectacular against the Stars, so I really shouldn't have been.
+ Daniel Briere, you scored two goals in the same game. Two goals! In one game!
+ Good job, Tyler Bozak, for going to the Winter Classic and not smearing your eye black all over your face. 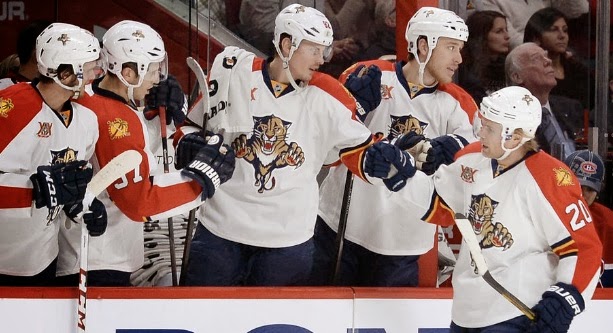 - The Habs need to stop losing to the Florida Panthers because insert joke here about how people go to Florida because Montreal is cold.
- Marcel Aubut, your Team Canada announcement speech was so long and no one even remembers what you said. And you name-dropped Stephen Harper, which isn't the best thing to do in a Canada that looks ready for new leadership.
- To everyone who suddenly got up in arms when one interview reminded them that black female cast members are a rarity on SNL, then thought that Kenan Thompson's attempt at justifying it were lame, and now are complaining that the hiring of Sasheer Zamata was an act of "blatant tokenism" when they most likely haven't watched any of her work: you get a Minus. You basically pushed for a diversity hire and now are complaining because you think you got one, before even finding out if Zamata is going to be any good on the show? Do you seriously have nothing better to do? Did you tire of saying "I haven't watched SNL since ____ was in the cast"? It just seems to me that if we as an audience want new voices in comedy, and welcome comedians regardless of cultural background, that we shouldn't immediately jump to conclusions and write thinkpieces before Zamata has even been to her first costume fitting.

NOT SURE IF IT'S A PLUS OR A MINUS
The Bell Centre bat. Funny? Scary? Some kind of omen? I don't know.

Oh, and by the way, I'm too nice to give a Minus to any player who made their country's Olympic team but doesn't "deserve to." There will be none of that here.
Posted by Rookie at 10:59 PM No comments:

Wow, you share one scary picture of a hockey coach and suddenly everyone's having nightmares.


Naturally, I was scared out of my mind, so I shared the picture, and then everyone else shared it too. I'm pretty sure that this is the exact plot of most horror movies.


So, the picture scared a bunch of other people and spawned a whole lot of "looks like" tweets. Here's a list:

Sam the Eagle from the Muppets
A lab experiment cross between an Orc and Sean Penn
Tony Blair
"Looks exactly like a Spitting Image Puppet of himself"
Mr. Burns (which is a comparison that some might call... excellent)
Bruce Arthur says this is "art," so I guess you should never go to a museum with him.
The Penguin
Bitter beer face*
Mr. Bean
This ultra-creepy Phil Collins doll
A Guy Fawkes mask
Freddy Krueger
Jay Onrait in 20 years
Basically anything in a movie that would scare you
Max Headroom
Something terrifying that I think might be Leprechaun
Cyril Sneer, the bad guy from The Raccoons
The Grinch Who Stole Christmas

If I've learned anything tonight, it's that I accidentally gave a bunch of people nightmares, helped to spawn a parody account, and that pop culture was pretty damn terrifying 30 years ago.