There are tons of things I should be doing. But I'm writing instead.

I really should be packing for my upcoming vacation, and maybe writing about how the Habs tend to lose when I'm out of town. (I think that this season may be a reversal of fortune, because they've lost every game I've seen at the Bell Centre. Sigh.)

Instead, I find myself feeling kind of guilty that I'm going on vacation now. Right smack in the middle of Movember, when I should be at work, encouraging my Mo Bros to raise more money and telling them that their mustaches are growing in nicely. I braved the first few days of awkward co-worker Sidney Crosby mustaches, and now I'm going to miss a week of Movember glory! It also means that I can't constantly bug my friends, family, and followers for donations, and spout random bits of health trivia at them whenever I want. But hey, if you want to make a donation while I'm on vacation*, just click on the mustache below:

Movember is as important to me as ever - it has to be, as I become more and more aware of how important it is for the men in my family to be in good health. However, I've been hit with that weird sort of guilt where I want to help everyone all the time, even though I know that I can't. Still, the damage done by Typhoon Haiyan in Asia is too devastating to ignore. So I'm doing my part. I've set up a fundraising effort in association with All Habs, and I'm hoping that friends and hockey fans alike will make a donation if they haven't already. To be perfectly honest, if you don't have that much to donate but you'd like to help one of these causes, I think I prefer that you donate to the typhoon relief effort. Cancer and mental illness are scary, but those who have lost their homes and families need help as soon as possible.

If you're able to help out financially, that's great. If you can't, please spare some good thoughts or say a prayer for everyone whose lives have been affected by illness or natural disasters. I might be away from my computer, but I'll be hoping that these causes get the help they need.

Okay and yes, I'll be hoping that the Canadiens go on an awesome winning streak. Mo Habs Mo!

It's been HOW long since I wrote a Plus/Minus? And I let a basketball game get in the way? Geez. Sorry. I'll try to work on that. 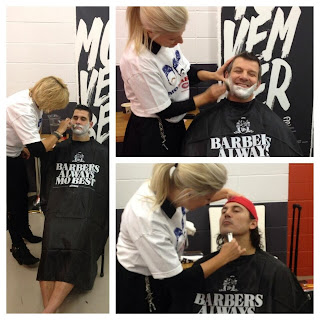 PLUS
+Thank you, Mikael Bournival, for being the new Brendan Gallagher. (Sorry, Louis Leblanc, but another kid with a French last name stole your thunder.)

+ George Parros is back! And his mustache will be, too!

+ Thank you to the clueless group of people who sat behind me at the Bell Centre during Tuesday's game. You entertained my followers more than I could have on my own. (I know I used to be much more of a rookie than I am now. But there's a limit to my patience.)

+ I know I'm not supposed to like goalies who do everything right and beat the Habs, but Josh Harding was great in his start against Montreal and has had an awesome season so far.

+ Here are my thoughts on recent episodes of Scandal:

- Some jerk on sports talk radio apparently thinks that all of the world's evils have come from women trying to break into the sports world. I'm not even going to bother mentioning his name or anything, because who cares. Didn't I already deal with this moron when he called in to The Franchise the last two times I was on?

- So, Semyon Varlamov gets arrested for alleged domestic abuse, and continues to play. Gee, why does the whole "Avalanche goalie hurts wife/girlfriend" narrative sound so familiar? Could it be because Varly's coach did the exact same thing, but most people in the hockey world choose to pay attention to his accomplishments, and sweep his personal crimes under the rug. Roy's anger issues are looked at as yet another of his quirks. It was only problematic when he was basically responsible for that huge on-ice brawl as Remparts coach, because it affected hockey (and was symptomatic of a pretty big problem, one that he might indirectly be to blame for.) The Denver Post claims that Roy is "sticking his neck out" for Varlamov. That's bullshit. Roy isn't taking any risks. He's doing exactly what he thinks is right, which is to ignore the fact that the goalie he's taking such good care of might be a criminal. Roy thinks that this is far, when really it's reprehensible. For some unfortunate reason, people don't care about off-ice violence. Letting Varlamov start games when he should be under investigation, or getting help for whatever issues he may have, just proves that there's a growing culture of indifference towards players' behaviour off the ice. Players aren't seeing any consequences to their actions, even when they need to. If this doesn't stop soon, the NHL will be no better than the NFL.

Stick tap to Wrap Around Curl, who is also angry and disappointed that this league isn't doing anything.
Posted by Rookie at 2:20 PM No comments: