The Hab It Her Way Summer Reading Project is my way of sharing the misery that is reading The Smart Girl's Guide to Sports, which cost $2. Let's laugh at this together.


The chapter on baseball is, appropriately, interminable. I could take this chapter to a baseball game and I would likely need some extra innings to finish it, and that's not even including the time it takes to roll my eyes at a lame joke, close the book, and wonder why I'm putting myself through this.
(It should also be noted that I obviously didn't take this book to a baseball game, as evidenced by its pages, completely unstained by sauerkraut and ice cream.)
The chapter begins with a few paragraphs explaining why baseball is interesting. And yet I remain unconvinced. The author even tries to compare it to chess, which I have heard a hundred times before - wouldn't I just play chess on the regular if I really liked it as a game? If I'm not a fan of chess, will society at large give me a free pass for not being a fan of televised baseball? So many unanswered questions.

I did learn something from this chapter: That the tradition of the seventh-inning stretch originated with rotund American president William Howard Taft, who stood up during a game to stretch his legs.
The author could also afford to learn something: she doesn't seem to know what a designated hitter is. (I didn't know until a couple of years ago, but now I know, and feel as though I should teach her.) She seems to think that a designated hitter is the sporting equivalent of having someone who can go to work for you on a day that you're too grouchy to do your own job. As far as I know, that's not it at all. A designated hitter is more like the professional equivalent of my old job, where I managed Facebook and Twitter accounts for a boss who thought that a Twitter account didn't need to have more than five tweets on it at a time. Her job was to coordinate the stuff that we were promoting on social media. My job was to make sure our social media presence was... well, present. Pitchers pitch and designated hitters are designated to hit. How hard is that to understand?

This might just be a personal gripe, but the "Legends" section was the worst thing in the whole chapter. The section does not appear to put its legends in any particular order, but I'm going to get irrationally angry about one thing anyway. The author put Mark McGwire's bio before Jackie Robinson's. HOW AND WHY? This is Jackie Robinson we are talking about - an athlete who broke the colour barrier at a time when the colour barrier was awfully hard to break, a man whose resilient spirit was matched only by his talent, a man whose memory is honoured to this day in cities all over North America. You do not put anyone ahead of Jackie Robinson. I don't care how "American as apple pie" he is, or that he used steroids to break a record right before a "dark-skinned Dominican" did. (Sammy Sosa, by the way, is considered a "legend in the making.") 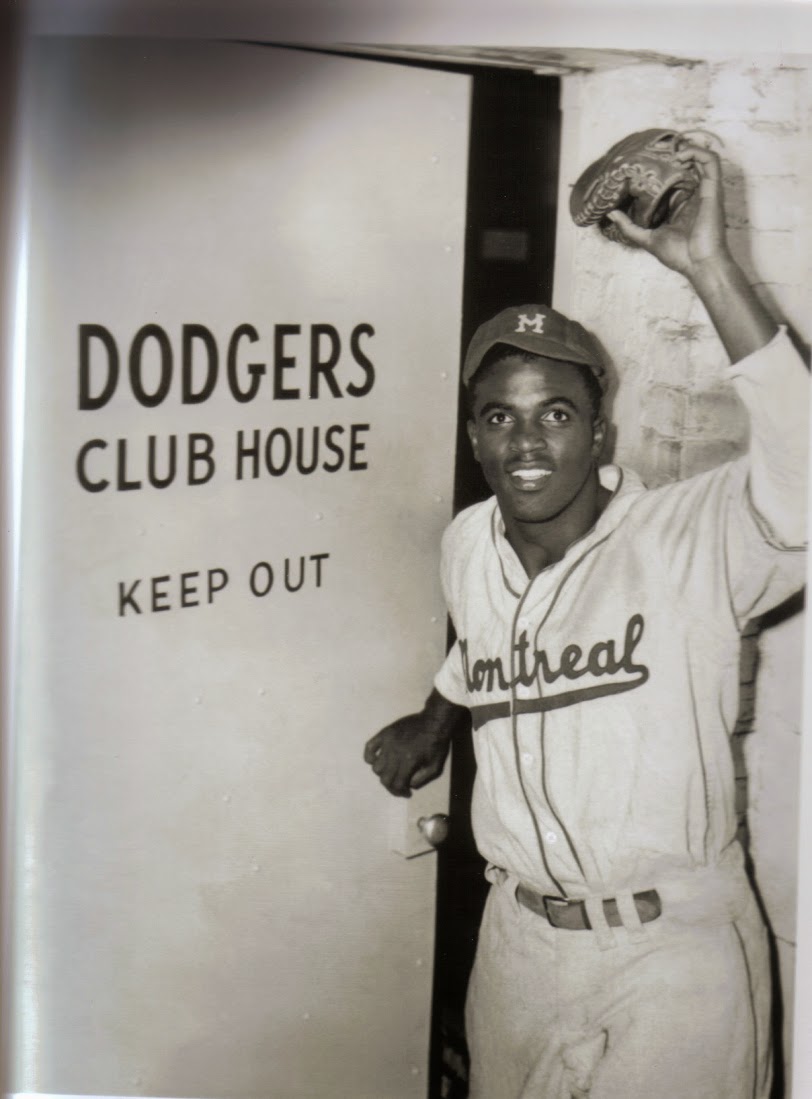 If this book was written in 2014: You already know that I'm going to say it should be all about Mo'Ne Davis. But it would probably be all about Derek Jeter's retirement and the not-a-joke hashtag #RE2PECT.
Posted by Rookie at 11:36 PM No comments:

At this point, I'm not surprised when someone who's made lots of money from professional sports is in the news for all the wrong reasons. It's not just NFL players - after the "scandals" surrounding Donald Sterling, Stephen A. Smith, and Semyon Varlamov, we'd all be incredibly short-sighted to think that way. However, I'm always amazed at the way people react to such occurrences. Ray Rice's firing yesterday was another such event.

This isn't something that just happened recently - the incident occurred months ago, and a lot of people were upset about it, and wanted to see Rice punished more severely. It was talked about during the offseason when the NFL started to do damage control. This public anger really only hit critical mass when a tape was leaked, and then suddenly everyone knew just how wrong it was, and got up in arms about how badly the Baltimore Ravens needed to terminate his contract. Which they did, in what a lot of people called a PR move.

"They didn't fire him because it was the right thing to do," came the cry from all corners of the Internet. "They fired him because he was damaging their brand!" Thank you, Captain Obvious. Anyone who knows that the events caught on tape didn't happen last week knows that the Ravens took an awfully long time to fire someone who beat the woman he claimed to love. Ray Rice was fired because the general public - everyone, even people who don't want football - was shocked and offended.

Why did it take us so long to become so shocked? Why did we have to wait until TMZ released video evidence of Rice punching his fiancée to realize that he had done something wrong? If there had been no video evidence, there is at least a slim chance that Ray Rice would not have been fired at all. And that, to me, is the scariest part of all this.

It's time for us all to stop waiting until it's too late to speak up or make a real difference.
Posted by Rookie at 10:33 PM No comments: