Hab it her way Awards: Not retired yet

Today's categories were going to include the Betty White Trophy for Please Don't Retire Ever, but with Teemu Selanne re-signing in Anaheim, all of the nominees have made their plans for next season. (Hey, Nick Lidstrom, it's never too late to un-retire!)
So, in its stead, please have a look at these categories:

Scott Gomez not scoring goals: Okay, we get it. I hated Scott Gomez before it was cool, and now I want off this bandwagon because I didn't build it for jerks.
Patrick Roy as the saviour of the Habs: Hopefully Marc Bergevin and (gulp) Michel Therrien can silence this for good. Just because someone is a legend as a player, does not immediately make them qualified for every job in the NHL. And a bunch of other reasons. Okay?
Hating the Canucks and their fans and Vancouver and their moms: People really, really hate the Canucks. Like, more than they love-hate the Canadiens. More than they hate the Leafs. More than Toronto-based media love the Leafs. Don't they ever get tired of it?
Paulina Gretzky: Someone call me when this story takes some kind of an interesting twist? As in, like, "Paulina wakes up one day, is not starved for attention"?
The now-finished saga of #FailForNail: "Yay! Our team is the best worst!" Like, what?

The Tobias Funke Trophy for Most Hilarious Thing We Laughed At 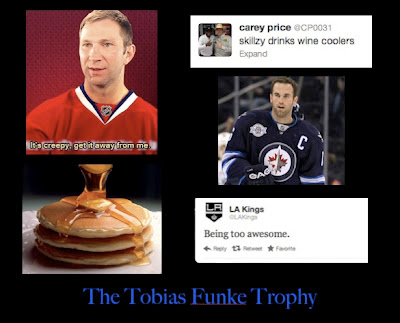 The Michel Lacroix Trophy For Best Habs Moment
Carey Price getting drafted to Team Chara at the All Star Game, then winning everyone over by being hilarious at the Skills Competition:
Lars Eller's four-goal game
Max Pacioretty's hat trick 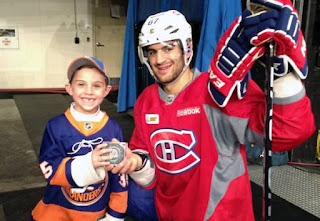 Blake Geoffrion puts on the same colours as his father, grandfather, and great-grandfather

...maybe we're a little biased towards MaxPac. But just a little.
Feel free to scroll down and vote in other categories, if you haven't already!

The last three categories were really fun to write up, but I think it's time to talk about some actual hockey players, no? Here are some categories that recognize some of the season's best players.


The Youppi! Trophy for Habs MVP 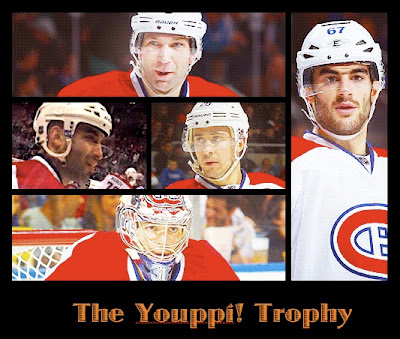 Almost every player on this list could be called the "core" of this year's team; the reason why we watched even the most dismal of games. It might not have been a championship season, but we had a lot to be proud of. And one guy we laughed at.
Erik Cole
Josh Gorges
Scott Gomez
Max Pacioretty
Carey Price 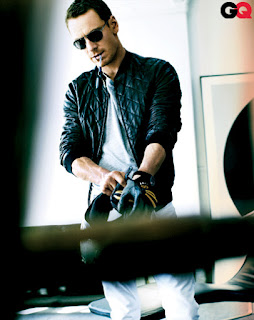 *We at Hab It Her Way do not support Mr. Fassbender's alleged violence issues, but we appreciate his talent, his European-ness, and how fun it is to say his name. If any of these nominees even try to lay a hand on a woman, they will be dead to us.
Dustin Brown: I've thought he was awesome for a while now. And then at some point during the playoffs, TSN and CBC caught on. Now he's the golden boy or something.
Claude Giroux: Yeah. There's a Flyer on this list. That's how good Giroux was this season.
Henrik Lundqvist: Maybe it was 24/7. Maybe it was a great year to be a Ranger. But something made King Henrik a bigger star than ever this season. Which is something that I'm willing to admit, even though I hold grudges. Speaking of which...
Max Pacioretty: This is not hometown bias. This is just a well-deserved nomination for a player who could have been a Masterton nominee even if he hadn't suffered a terrible injury.
Gabriel Landeskog: He won rookie of the year for a reason. It seems like he had no trouble transitioning to the NHL. I wonder if Matt Duchene is jealous?

I'm pretty sure I'm forgetting someone... nah, I got Max Pacioretty, so it's all good, right?

HIHW Awards: More On The TV

On the heels of yesterday's Coach Taylor nominees, here are a couple more TV Person categories for you: 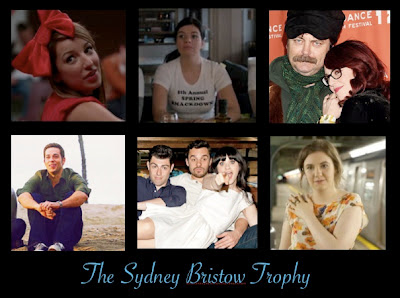 Vanessa Lengies as Sugar Motta, Glee: Everything about her is hilarious: The awful clothes. The narcissism. The fact that she's the only character on Glee who isn't even slightly capable of singing.
Casey Wilson as Penny, Happy Endings: Name me another character who sang at a boat show this season. You can't. Casey Wilson would have had a great career on SNL, but she's doing even better on her own.
Nick Offerman as Ron Swanson, Parks and Recreation: If you watch the show, I don't think you need me to explain this to you.
Megan Mullally, lots of shows: She has appeared on no less than four comedies that I watched this season, and at least two others that I don't. She may have been funniest on Up All Night, as the evil, conniving, Southern-accented rival of Maya Rudolph's character.


Zachary Levi as Chuck, Chuck: He spent five seasons with this character, and it shows. By the time the series ended, there was so much more to the awkward nerd we met in the pilot. The Chuck finale was satisfying, and yet I'd love to see just one more episode. Plus, like a lot of nerd-friendly actors, Levi loves fans and is still great to them.
Insert your favourite New Girl castmember here: All three of the guys are hilarious. But there would be no show without Jess. But then there are all the guys' love interests, and all of Jess' love interests... Who to choose?
Lena Dunham, Girls: Haters be damned. Lena Dunham will probably wake up to a few Emmy nominations in a couple of weeks. Girls is both hilarious and heartbreaking, true-to-life and surreal all at once.

The Studio 8H Trophy For Next Big SNL Star 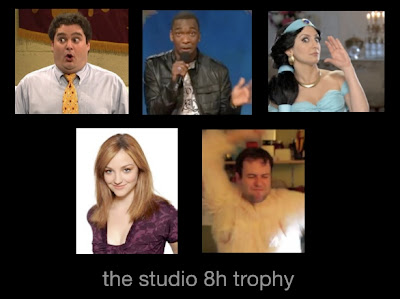 Bobby Moynihan: I've had my eye on him since his very first show. He's weird and quirky, has great timing, and can play big or small. If Stefon weren't such a gut-busting powerhouse, Drunk Uncle would definitely be everyone's favourite Weekend Update correspondent.
Jay Pharoah: Losing Kristen Wiig and Andy Samberg means that SNL will have a whole lot of airtime to fill up. It's time to give Pharoah his due. The impersonations. The faces. The fearlessness. I, for one, can't wait.
Nasim Pedrad: She could be here based on her Kim Kardashian impersonation alone, but she's got so much more than that to her. I'm still waiting for her to build a cast of characters, but what I like about her is that she could probably make anyone laugh. Drop her in any SNL cast, any time, and she's probably work.
Abby Elliott: She was born to be on SNL, and not just because her dad used to be on the show.
Taran Killam: He's already replaced Jason Sudeikis as America's Boyfriend. Not just because Sudeikis seems like he's afraid of commitment and kind of a creep, but because Killam is the perfect storm of hilarious and completely lovable. Need I remind you of the "Call Your Girlfriend" video? I would have probably asked him to marry me already if he wasn't fully committed to How I Met Your Mother's Cobie Smulders.

As usual, write-in votes, reasons, and hate are welcome in the comments section.

Posted by Rookie at 5:12 PM No comments:

The return of the HIHW Awards

Let's just pretend that I've actually been writing lately. In reality, all I've written are e-mails at work and my new advice column for All Habs.

But, since it's the offseason, let's look back and hand out some random awards. Up first: Our favourite person on sports TV! 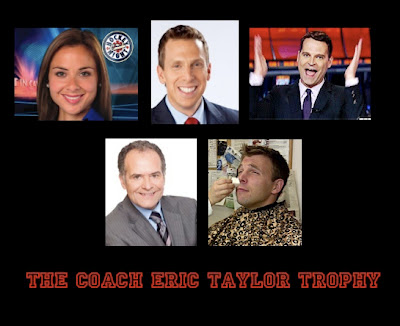 The Coach Taylor Trophy For Favourite TV Person (Sports)
Andi Petrillo, CBC: Because let's be honest, Jeff Marek made the iDesk look like dudes sitting in front of laptops reading things. I could have done his job, despite my zero years of broadcast experience. Andi Petrillo didn't get this nomination for being a token female. She got it because she's poised, she knows her stuff, she's not terrified of being on camera, she doesn't have a super-annoying voice like Jeff Marek does (no offense), and she does her job better than at least half of the more experienced sportscasters on television.
James Duthie, TSN: He's James Duthie. He can do everything. He can make boring stories interesting, and when he can't, he's fully aware that he's being boring. But most of the time, he's more than happy to crack a joke or break a story.
Jay Onrait, TSN: Not afraid to be weird or funny or even unfunny. He's like the Zooey Deschanel of the sports world - he does what he wants, no matter how bizarre, and we love him for it.
Pierre Houde, RDS: Hands down, the best voice in hockey sportscasting that I've heard. He's the reason why I watch Habs games almost exclusively in French. (Yes, I forgive his occasional mispronunciations of English names and "Colaiacovo.")
P.J. Stock, CBC: Tell me P.J. doesn't totally crack you up. Go ahead, tell me.

Please accept my apologies for this average-looking graphic and then cast your vote below. Write-ins are also accepted in the comments!