Let me tell you a story from my rookie season. My REAL rookie season; the one I've been coasting off for the last few years (and thank you for reading this blog, by the way.)

You may remember the spring of 2008. It was a great time to be a Habs fan. Our team was first in the conference and fans were high-fiving each other in the streets. It was the first time I watched my team go to the playoffs.

And yet I chose to watch Jack Layton speak at Concordia, rather than settling in at home in my Koivu T-shirt to watch the game from start to finish. (Czechtacular was supposed to come with me, but politely changed her mind as soon as the playoff schedule was announced. We split duties: I would listen to Layton while she watched the first half of the game and kept me updated.)

Why? Because Jack Layton was the leader of a major political party and he was coming to speak at my school for free. Because he wasn't afraid of what a tough Concordia crowd could be like. Because he wanted to speak to students and get them involved in what was happening in their own country, not just wait until they were the heads of those young families everyone wants votes from. Because he made politics cool. Because he had a great mustache.

And that evening, he was exactly what you would expect Jack Layton to be like. Fabulous mustache, tie, no jacket, sleeves rolled up, and about as dynamic and human as any politician could be. He talked to a few people in the crowd before being formally introduced and taking the stage. The formality ended there. He started by thanking us all for showing up instead of watching Game 1 and half-joked that he expected to be talking to an empty room. He then said, "If you're on your cellphone and find out the Habs scored, don't keep it to yourself." He actually gave his crowd permission to interrupt him.

Layton then continued to talk about growing up in Montreal, how his family had opened Layton Audio on Ste. Catherine so many decades ago, going to McGill (boo), and living most of his adult life in Toronto. He also talked politics, obviously, and I look forward to the day when someone tries as hard as he did to inspire people just by expressing himself honestly. His entire speech proved that he was one of a kind.

He ended his speech by inviting us all to a nearby pub to ask him questions face-to-face and engage in real discussion, rather than continuing to talk at us from a stage. That's the kind of thing I'd expect to hear from a real person, not a talking head who made regular appearances on election posters and in the news.

Habs fans, we lost one of our own. And he was a great one, and his work for this country wasn't finished. I can only hope that I'm wrong in thinking that he was one of a kind, because I'd be so happy to see another political figure try to move Canada like Layton did.

Email ThisBlogThis!Share to TwitterShare to FacebookShare to Pinterest
Labels: Canada

The summer days are already getting shorter and a little bit cooler. But the season hasn't started yet and the end of summer has me itching for that first puck drop. What better way to look forward to next season, than to remember what I learned last season?

What a stanchion is.

P.K. Subban is the very definition of lightning in a bottle.

Rookies need to learn how to behave in the NHL... but respect is a two-way street. A veteran can't complain about not getting respect if he doesn't show any.

We may hate Leafs fans, and they might be incredibly tasteless when they hate on us, but they're not bad people. The way that Maple Leafs bloggers reached out to Habs fans as soon as Graham Rynbend rushed to the ice to care for Max Pacioretty showed an incredible amount of class and sympathy. Sometimes it's not about your team - it's just about being a hockey fan.

About that Graham Rynbend: He's the best.

I'm too proud to say "I told you so," and I know this because I didn't go gloating to all those people who gave up on Carey Price last season. So never underestimate someone's opinion, and never say never.

I also didn't start gloating to all the people who never expected to become Ryan White fans. 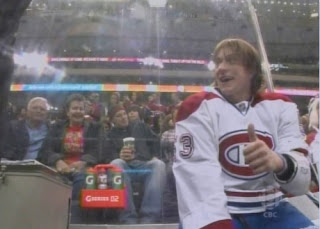 Like most people my age who basically grew up with Saku Koivu wearing the C, I still miss my old captain. But my new captain is nearly perfect.

There are very few places on Earth like the Bell Centre during the playoffs. Or the Bell Centre in general: It doesn't matter what kind of a day you've had, if you've got tickets to a Habs game, everything goes away from the moment the flag kids take to the ice to the moment you leave.

If you go out someplace to grab a beer and watch a home game with some friends, DO NOT LEAVE EARLY. Kirk Muller will show up almost an hour after you leave. Your friends will see him and maybe even speak to him, and you will have missed out on it. (This happened to me twice this season. TWICE. And now we have no more Kirk Muller, so I totally missed the Kirk-boat.)

Posted by Rookie at 9:48 PM No comments:

I keep asking myself something, ever since the NHL lost both Derek Boogaard and Rick Rypien over the summer.

NHL teams have people to look after a player's every need: coaches, doctors, equipment managers, skate sharpeners, what-have-you. They take care of preparing the players physically. But what about their psychological problems?

Think about it. Boogaard had substance abuse issues and Rypien had mental health problems, both of which presumably lead to their untimely deaths.
Professional athletes are under a tremendous amount of stress; no amount of fan adoration or scoring bonuses can change that. Some deal with it better than others. They could probably all use a little help from time to time.

I've asked around (thank you, sources) and have learned that most of a hockey team's medical staff isn't permanent. Specialists are only brought in if they're needed. This includes psychologists. Most people are too proud or afraid to admit when they think they might need psychological help. No one wants to admit they're crazy, or that they aren't able to help themselves any more. Somehow I think that this is even truer for professional athletes.

I obviously don't know any specifics - I don't know what Boogaard or Rypien was going through, or what it's like for the hundreds of other guys in the NHL. It's not fair that they have a job where they're provided with the best doctors, coaches, and trainers, but not the best psychological help. And I can't imagine how difficult it must be to know that so many people love buying tickets to see you do what you do best, and that that makes them happy, but that you're struggling with something that you can't talk about.

These guys weren't even 30 yet. That should be enough proof that the NHL needs to pay better attention to the physical and mental health of its players. The league is nothing without its players, and they deserve to be taken care of.
Posted by Rookie at 9:40 PM 4 comments:

What to say in the offseason?

Sorry for the lack of posts recently. I still miss both hockey and television. Czechtacular and I have been insanely busy (but you can read some awesome stuff she wrote over at All Habs in the last few weeks.)

One of those things that kept me busy? I took part in last week's Sunday Shinny panel on The Franchise (only the best weekend morning sports show this side of anywhere.) I got to share some airtime with Laura from The Active Stick and the Franchise regulars, talking Islanders, Josh Gorges, and every other hockey topic we could think of in the middle of the offseason. If you're interested, you can hear it here.
Posted by Rookie at 4:40 PM No comments: