"Tries hard, needs to produce more on the ice" 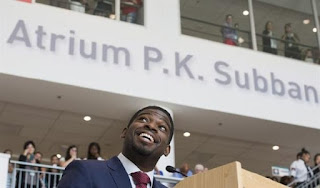 I haven’t written as much as I intended to this season. (That much should be obvious.) I could blame it on my schedule, my increased fatigue due to minor health stuff (which is the same thing that slowed me down a couple of years ago, eventually leading to the demise of my Plus Minus column), or the slow, inevitable decline of my Macbook. All of those are legit reasons (except for the Macbook, because I’m probably to blame for its decline. I was not kind to its battery. I should have done better. I’m a terrible laptop mother. Let’s move on.) But one of the reasons why I haven’t been writing about hockey is that in order to be writing about hockey regularly, I’d have to be watching hockey regularly, and I’ve been watching fewer and fewer games and SportsCentres.

The sport, and the culture surrounding it, have lost a bit of their luster. The newfangled major hockey broadcasts, with their oversized ice-blue sets and laughable analysts (#NotAllAnalysts), just don’t do it for me. It’s like watching a show long after it’s jumped the shark – I still watch, but sometimes it’s a little more painful than I’d like. Hockey culture, among fans, journalists, and players, has disappointed me this year. There were some incredible highs, but the lows just sucked. (If one more man tries to tell me how to feel about the charges brought against Patrick Kane, I’ll… maybe I shouldn’t finish that sentence, because I’m not an elite athlete and anything I do will most certainly have consequences.) It’s been hard to love a sport where the bad gets worse and the good rarely gets better. It’s kind of no fun to not really care that the Habs are on a losing streak even though everyone’s screaming about it as if the sky is falling, as if the team’s MVP is not on IR, as if the players themselves are not people. Sometimes I don’t know what to do or what to write about.

But I guess you can say that about anything, right? Every musical genre had at least one horrible hit song this year. (So many unnecessary throwbacks to the early-to-mid-2000s. So many.) Every TV network had hits and misses. Every stand-up comic had the kind of performance that made them wish they had stayed home. (Or maybe it was just me.)

So I will try to focus on the good that happened this year. On the female hockey players who are finally starting to get the respect, attention, and remuneration they deserve. Or on Spider-Mable, the little cancer patient in Edmonton who rescued some Oilers players from the clutches of an evil villain. Or Mike Condon doing his best to continue earning the NHL ice time he worked so hard for. Or the incredible progress that Max Pacioretty has made, that led him to become captain of the Montreal Canadiens. Or the rest of the world finally realizing that Carey Price is one of the best hockey players on Earth and don’t you deny it. Or the drive, on and off the ice, that makes PK Subban superhuman. Or the enduring legacy left by men like Dickie Moore.
Hockey isn’t all bad. 2015 wasn’t all bad. Let’s focus on what’s good, and work on whatever needs improving, and maybe the hockey world will be a little better for it by this time next year.
Posted by Rookie at 4:22 PM No comments: