An Open Letter To Angela Webber 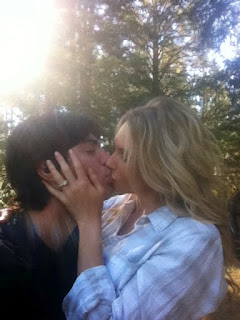 Yeah, it's probably really creepy that a complete stranger is writing a blog post about you. I swear I'm not that weird.

Anyway, congratulations on your recent engagement to Carey Price. You both seem like great people and I wish you all the best.

No, for real! All my male co-workers laughed at me after they found out the news, and asked me if the dream was over. (They think they're funny.) For some reason, it was incomprehensible to them that I would be happy about this. Which makes no sense to me, because you're the girl who got Carey Price to dress up in a couples costume at Halloween. And that costume was Batman and Robin, which might be the best idea I've ever heard. Seriously, you are a genius.

And as someone who really only knows your fiancé as a hockey player, I have to say that he's been different ever since you moved in with him. He plays well, he's confident, and he's focused. I can only assume that it must be really great for him to have someone to come home to, who doesn't only care about what happened on the ice.

Anyway, a lot of fans who've been congratulating you two have said something like "Hope to see some little Careys running around soon!"
I'm not going to do that. Asking an engaged couple about babies is like walking into a dinner party and asking what's for dessert. So, if and when you have kids, I will be happy for you. Until then, I won't say anything about them, except for this: If you have a son, please consider naming him Vincent. If he grows up in Montreal, it'll be good to have a name that's easy to say in both English and French. But mostly you just cannot pass up an opportunity to name your kid Vincent Price. And again, congratulations, and I hope you two have a happy and healthy marriage.

Best,
Rookie.
Posted by Rookie at 9:52 PM No comments:

On double standards at the Olympics

Why do we hold Olympic athletes to a different standard than regular athletes?

Most Olympians are heroes for two weeks, then remembered for a short while, and that's about it. But pro athletes (NHLers, NBA players, and the like) are in the spotlight day in and day out. Does one work harder than the other? I don't think we could say so with any certainty unless we followed an Olympian and a pro athlete for a year, or four, or twenty.

Lolo Jones has famously been the subject of a scathing New York Times writeup. For, what, exactly?

For promoting herself as beautiful or sexy? I may not agree with this, but it's an unfortunate truth that female athletes (and maybe all women) get attention for their appearance. I hate to admit it, but we all know it exists. Outside of the Olympics, the only women's sport that seems to get a lot of media coverage is tennis, and I think that speaks for itself, so I'll stick to discussing the image of female Olympians. During the Vancouver Olympics, I read a profile of American ice-dancer Tanith Belbin, which made some mentions of how long she's been skating and stuff but mostly focused on the fact that she's pretty and that the (male) writer found her attractive. If someone wrote an unsolicited profile of Lolo Jones basically talking about how "exotically beautiful" she is and making a very brief mention of the fact that she's a successful athlete, no one would make a fuss. But Jones has tried to turn the tables and exploit this to her advantage, and suddenly there's a scandal brewin'. How dare she ask people to look at her, when that's what they would have done anyway?

For being on a lot of magazine covers and getting a lot of sponsorships? Pro athletes do this all the time. Seriously. They show up on the cover of The Hockey News or Men's Health. They're cardboard cutouts in grocery store displays. They're in half the commercials you see. It's not like they need the money. Sidney Crosby would not be in the poor house if the only money he made came from multi-million-dollar paychecks in Pittsburgh. And yet he is never criticized for taking on too many sponsors. No one ever tells Crosby to give the money back if he fails - and he's never really failed, per se, because his worth as an athlete isn't measured by how well he does on a single, predetermined day. (Which is not to say that I consider anything less than a gold medal to be a failure. I'm not an idiot.) Most Olympians, like Jones, train like crazy and don't make millions doing it. Some of the more successful ones are lucky enough to have great sponsors who promote them even when the Olympics aren't two weeks away. But I can only assume that most of them have to strike while the iron is hot. Becoming a world-class athlete and traveling to competitions can't be cheap. It seems to me like a sponsorship would mean a lot more to an athlete who doesn't make gobs of money. But that's just me. I don't work for a company that sells sports drinks flavoured with Sidney Crosby's sweat, so what do I know?

I know for sure that Lolo Jones has realized that she lives in a world (and especially a country) where image is everything, and ubiquity will get her noticed in the short time-frame that she has to do so. So whether or not we like her approach, we (as spectators) have to respect her game. She may not have won a gold medal, but she's a world-class athlete. I think she's earned the right to do what she wants.
Posted by Rookie at 12:14 AM No comments: