A lesson for the next Olympic tournament 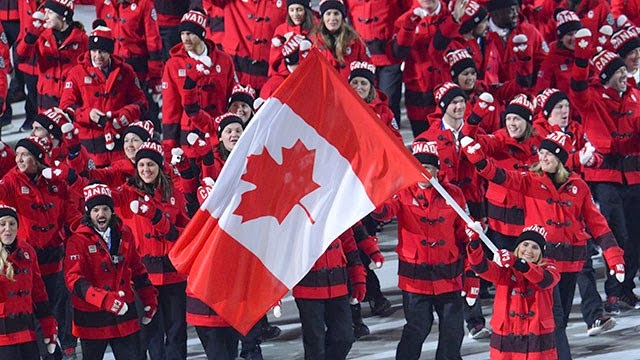 I love the Olympics. Always have and always will. I didn't think anything would change that.

During these Winter Games, though, there’s been a lot that has irked me. Maybe the general negative attitude towards the host country helped the bloom fall off the rose. But it didn’t stop at the poor organization or the institutionalized homophobia. It just kept going. Maybe my fuse is short because the World Juniors just happened and I was already completely sick of hearing the word “jingoism” – seriously, I’d be happy if all international competitions were cancelled forever if it meant I’d never have to see my Twitter feed wallpapered with the same damn buzzword over and over again.

Even that is not as utterly infuriating as the awful trend of comparing female athletes to male athletes for no reason at all. I know that the events are all separated by gender, except for pairs figure skating in all its heteronormative simplicity (seriously, everyone, if we’re going to bash Russia for its anti-gay laws, let’s maybe evolve how we talk about sports first.) I have no issue with comparing athletes as far as their ability goes. A male skier wins gold, and that means he’s the best male skier in the world at that moment. A team of female curlers win gold, and that means that in that moment, they are better than every other women’s curling team. We can compare medal results between men and women, too, of course. No harm in that. But so many of the media outlets are so used to reporting on men’s sporting leagues year-round that they sometimes don’t know how to talk about female athletes. So, inevitably, they’ll fall into biased reporting and make it sound like women should strive to be more like men – and because we as viewers get our information from these media, we don’t seem to have a problem with that. The fact is that this is a huge problem. As far as I know, an Olympic athlete doesn’t get more sponsorships or better coaching based on gender alone. (Please correct me if I'm wrong.)

I’m proud of Kaillie Humphries and Heather Moyse. I’m equally proud of Alex Bilodeau. But they have literally nothing in common other than the country they play for, so why would a reporter invite a comparison just because Humphries and Moyse repeated their gold medal win? Each athlete has made Canada proud with his or her accomplishments. That’s it. No need to ruin a gold medal win with patriarchal or language-biased reporting. Even the reporter’s gender doesn’t matter in this case; it disgusts me that that’s how far this goes.

Female hockey players are compared to the men’s teams. If only that were the case – then the world would have enough teams of well-coached, well-trained, talented, popular women that we’d never again have to worry about women’s hockey being removed from the Olympics. Women would take a short break from the leagues they get paid handsomely to play in, go to the Olympics, capture the attention of the entire world, and go back home to finish their seasons. If only. Instead, we get tweets like this one:

Show us your support for @usahockey women as they go for Gold for a chance to win a stick signed by @JohnCarlson74! pic.twitter.com/C9OcSfS87C
— Scarlet Caps (@ScarletCaps) February 20, 2014

Because fans need the incentive of a stick signed by a man to cheer for one of the best women’s teams in the world?

I'd hate to be Team USA's Amanda Kessel, because the fact that her brother plays in the NHL is treated as more than just trivia. If it were, I would hope that we'd hear people mentioning that Phil has a sister who's a world-class hockey player. It must be so disheartening to finally get to play in front of an international audience (the only really big stage there is for women's hockey) and constantly be referred to as someone's sister. Especially in a field where gender bias is already so obvious that likely the only reason Phil is more famous is because there's no NHL for women.

It happens here at home, too. Every time the Canadian women’s team has an excellent Olympic tournament (which, to be frank, is all the time, because they’re incredible) people like to joke that maybe the women’s team should replace the men! Or play with them, because they’ve proven that they’re good enough! Why is it impossible for us as Canadians to take pride in having the best women’s hockey team in the world for four consecutive Olympic tournaments without comparing the players we nearly forget when they’re not on our televisions? Why do we have to compare them to the guys we see on Hockey Night In Canada every week? “You might be as good as a man” is the most backhanded compliment a reporter or fan could give a player who was just named the best in the world. Why should we say that scoring two goals in a gold medal game makes Marie-Philip Poulin good enough (or almost) to play on a line with Sidney Crosby? Crosby would be lucky to play with someone who knows how to score a goal in Sochi.

The former players that TSN and CBC have employed to analyze and report on the women’s hockey tournament were fantastic. They combine the experience of a wacky colour commentator with the professionalism of a seasoned anchor. What I wouldn’t give to have a quality panel on my television on a regular basis, instead of the uncomfortable unemployed coaches and boneheaded former players that we see so often on RDS, CBC and NBC.

The Olympics are filled with incredible female athletes, from Canada and the rest of the world. Let’s give them the respect they deserve.
Posted by Rookie at 12:43 PM No comments:

Plus/Minus is as unique as a snowflake

I love the Olympics so damn much that the NHL break couldn't come fast enough. I can watch the Habs any time I want to - but international hockey, ice dance, and snowcross? If only I could be so lucky. Hopefully this Plus/Minus will cover everything effectively enough. 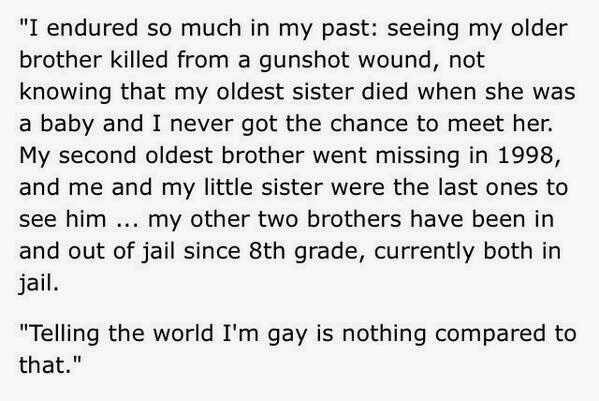 + To football player Michael Sam, for being brave and honest enough to come out before he's even drafted to the NFL. The sports world is evolving, and it gives me hope that someday it will be as inclusive and as incredible as the fans wish it were.
+ Ryan White is back and all is right with the world again!

+ To Patrick Kane for his candid interview (and a nice little goal) after his grandfather passed away.
+ To Max Pacioretty, king of the breakaway. Too bad he isn't king of the penalty shot, otherwise we might've seen a five-goal game from him on Thursday.
+ To Canada's medalists, of course: Mark McMorris, the Dufour-Lapointe sisters, and the figure skating team (including Tessa Virtue's dresses, and her arms.) (If anyone knows how one would get their arms to look like that, please scroll down to the comments section and say so.) 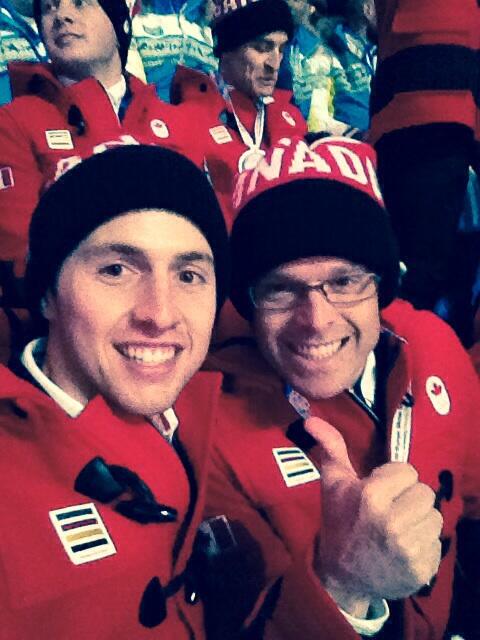 + Seeing a picture of Alex Bilodeau and Jean-Luc Brassard together. I think a lot of people my age loved watching Brassard back in 1994, and it's just so cool to think that Bilodeau, one of my favourite current Olympians, was watching too and would go on to win a gold medal because of it. + The Venezuelan flag bearer acted just like we all would if we got to be our country's flag bearer. Plus, this is his first Olympics: he's 43 years old and has only been skiing for three years.
+ I loved this video by SNL cast member Brooks Whelan, chronicling the last year as he went from LA-based part-time comedian to New York-based full-time SNL star (or, sort of.)
2013 from brooks wheelan on Vimeo.


MINUS
- It broke my heart to see Spencer O'Brien crying on TV because she didn't make the podium. It seemed as though she felt like she had let the country down. This Minus is for anyone who thinks it's okay to be disappointed in athletes who don't bring home a medal. Sure, it's great to see someone from your country on the podium, but that doesn't mean that they are a disappointment. I'm just proud to have Team Canada, and anyone who disagrees can just leave right now.
- Canadiens.com isn't letting me vote for Ryan White as Bell Player of the Week, even though he is Ryan White.
- Now that Fox has cancelled The X Factor, can it concentrate on developing its scripted shows? I'm giving them a Minus because I feel like that won't happen.

Now, if you'll excuse me, I have to go watch some skiing or skating or whatever happens to be on. Go Canada Go!
Posted by Rookie at 10:00 PM No comments:

Plus/Minus goes after the goalie

I guess the Habs are capable of winning games! Sometimes. Which is better than no times. And then they went and made a random trade, so I guess I still don't know how to feel about them.

PLUS
+ A huge Plus for this guy, who pulled off a pretty awesome surprise for his mom:

And she got to see her team win the Super Bowl. It must be so incredible to be there for that kind of moment, after decades of fandom. I'm so happy for this family and I don't even know them.
+ Carey Price and Josh Gorges giving their Super Bowl predictions: They gave some thought to their answers, which makes me think that when we're all grown up and they're retired, they'll make pretty good analysts. And they'll still be on our TVs.
+ Wait, is Daniel Briere a hockey player who scores goals? Whoa.
+ Bruno Mars delivered as a Super Bowl halftime performer. He and the Red Hot Chili Peppers did exactly what I hoped they would onstage, and a combination that I didn't think would work made for a pretty damn great halftime show.

@CanadiensMTL Carey Price's {yet again} Gaf yesterday and that wou;d be tied with G-Molson being 100% AWOL and out of tiu h wiht reality!!!
— DonEladioVuente (@DonEladioVuente) February 3, 2014

- The less I remember about this weekend's games, the better. (Except for Brandon Prust fighting a goalie. I want to be reminded of that all the time.)

- A huge Minus to any Habs fan who complains that Carey Price let in one bad goal this weekend. He's been one of the only consistent players on the team all season. He has worked so hard to keep the Habs from completely tanking. Hell, just last week the players in front of him embarrassed him. How quickly can anyone forget that?

Anyway, welcome to the jungle, Dale Weise.
Posted by Rookie at 10:23 PM No comments: