You Can Mo Your Own Way

So, it's the most wonderful time of the year, if you love mustaches. I happen to love Movember, because mustaches entertain me, and because I like seeing people show their dedication to a good cause.

Which is why it disappointed me that so many of the men I work with didn't want to join our office Movember team. (Luckily, all of the guys in my department stepped up. Every other department has a lot to answer for - looking at you, Tech Ops!)

Here are the top two excuses I heard from mustache dodgers:

"I can't/don't want to grow a mustache." I'd venture that three-quarters of guys who say they can't grow a mustache haven't even given it a good try. They're just lazy, or too vain to run the risk of actually having a crappy Sidney Crosby mustache. Hey, guys? It's November. You're growing a mustache. Movember has been popular (especially in Canada) for a few years now. By this point, most people will know why those errant hairs are on your face. It's not like you'll be the only guy who looks creepy for no reason. Quit being such a whiner.
As for the guys who don't want to grow a mustache? See above. People will know that you're growing a mustache for a good cause. They won't just think that you're Chandler Bing, trying to be Tom Selleck.

Movember supports really important initiatives, namely men's health awareness, prostate cancer, and mental health. So, not wanting to spend four little weeks growing a mustache for a really good cause? That's pretty weak. My co-worker Mike doesn't grow a mustache for 11 months out of the year, but has grown one every Movember for as long as I've known him. His first child was born in November two years ago, and he couldn't be prouder of the photograph where he's rocking his Movember mustache while holding his newborn daughter. Carey Price doesn't like growing a mustache (despite the fact that a well-groomed 'stache makes him look like an old-timey movie star), but he does it in November. He did it last year and the year before with his teammates, which was great publicity for the cause, and he's doing it again this year, even though he's not on TV every three days and constantly talking to the press. He believes in the cause more than he hates having hair on his upper lip. Because he is a man. (So, if you're wondering why ladies love Carey more than they love you, there's your explanation.) 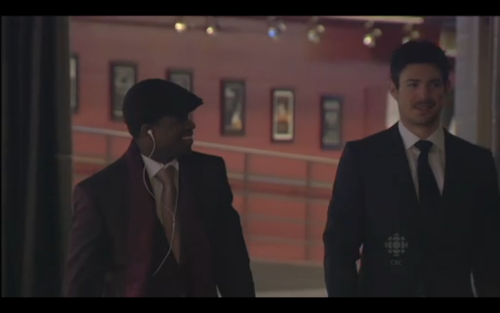 "My significant other doesn't want me to grow a mustache." I'm going to break this excuse down into two scenarios: Either you're lying, or your lady (or man, although in my experience the complaints have come from ladies) is awful.
If you're lying: Well, at least you probably will never be diagnosed with testicular cancer, because clearly you need to grow a pair. You're even worse than the whiny guys who tell me they don't want to grow mustaches, because you can't even take responsibility for your own cowardice. Don't blame the lady in your life for something you don't want to do.

If you're a significant other who doesn't want her man to participate: Seriously? You don't want the man in your life to participate in a fundraiser for men's health? Do you hate him? Do you not want him to participate in something that could potentially save lives? Maybe I don't understand your dislike of mustaches because I can't relate to it. Almost all of the men on my dad's side of the family have rocked 'staches. Seriously. One of my uncles had such an awesome handlebar mustache - it curled on the ends and everything - that people used to stop him on the street to compliment him on it. Maybe that's why I love mustaches: because I love my family. So, maybe you should do the same. Put the man before the mustache. If the man in your life thought about spending a month growing a mo and raising money for charity, you should maybe consider putting aside your hatred of mustaches. I'm not usually one to give unsolicited relationship advice, but this seems like something you should compromise on. It's for men's health. So many people, male and female, have raised money to cure women's cancers. Men wear ribbons and take part in 5k runs and whatnot out of love for their wives, mothers, sisters, or friends. Why wouldn't you want your man to do Movember? Think about the men in your life that you care about - your dad, your godfather, your cousins, the bartender who remembers what you like to drink, your favourite NHL player, or the guy who buys Timbits for everyone at work - and realize that you should support this cause for their sake.

If for some reason you're not growing a mustache, or telling the man in your life that he shouldn't, I hope to God that you have a legitimate reason for it. I also hope you'll consider supporting the cause by making a donation, helping out at a fundraiser or encouraging people you care about to see a doctor regularly and make healthy choices.

If you're a spambot, I'm just going to stop you right now. Your message will be deleted, so don't even bother, okay? Okay.